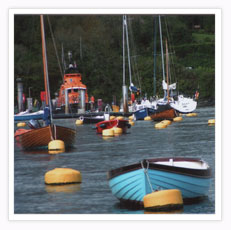 There are few places in England as beautiful and enchanting as Fowey.

The great houses along the Esplanade with their commanding views of the ocean lead into the quaint narrow streets that wind down to the waterfront and the bustling harbour.

The little ferry chugs across to the little village of Polruan on the other side of the estuary.

The great ruined batteries either side of the river give silent testimony to the ceaseless war of the local seafarers against pirates and the French and seaward, on the summit above Readymoney Cove, stands the redoubt of St. Catherine’s Castle.

Across from the Town Quay, squadrons of yachts line the shimmering waters of Pont Creek, sailors putting in at the Royal Fowey Yacht Club or the Fowey Gallants. 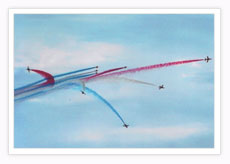 The annual Fowey Regatta in August is a major event on the  sailing calendar and combines with the great fancy dress Carnival that follows the Silver Bands through the town, the magical Red Arrows display as they arc in from St. Breock Downs to weave their rainbow smoke trails over the harbour and innumerable other events on land and sea for young and old alike, from the great ships down to the crabbing competition and the home made and highly decorated raft races. All is washed down with fine wines and real ales to the accompaniment of music on the Town Quay and a magnificent firework display on the final night.

Amidst the fascinating ancient architecture of the town two great buildings stand out, The 15th century Church of St. Fimbarrus (St. Finn Barr) and Place (Cornish: Plas = mansion) the 15th century fortified home and estate of the Treffrys who still live there. On the opposite headland stands the one remaining stump of the 7th century Church of the Holy Saviour at the beginning of the bracing and beautiful clifftop walk to Lantic Bay.

Above Whitehouse beach is the former home of Sir Arthur Quiller Couch, ‘Q’, who immortalised Fowey in his Troytown novels. By Bodinnick and along Readymoney are two of the Du Maurier homes. (There is the Fowey Festival here every May where the author of ‘Rebecca’  is celebrated with a feast of celebrities from all walks of artistic life who come to talk and perform). Leo Walmsley lived and wrote just up river behind the now abandoned railway line and Kenneth Grahame drew inspiration from the life of the River Fowey on his visits here.

Even in Winter there is a feast as a weekend in December is given over to a grand Christmas Shopping Market in marquees on the Quay,in the school and town. Some 70+ West Country small traders now attend and there are some excellent crafts, clothes, jewellery, victuals and beverages to be found. 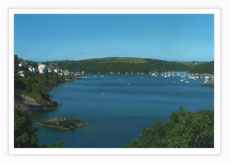 From the Harbour there are river trips available, outings to Mevagissey, charters to Looe and Polperro, sailing lessons, fishing trips, kayaks and self drive hire boats.

The town is full of good public houses and restaurants to cater for everything from the everyday to the special treat. The best cream tea with the best view is to be had at the Fowey Hotel which also does lovely formal evening dinners.  There is a garage, two post offices, a bakers, a minimart, a butchers with a delicatessen counter. The nearest fish shop is Richards at Par a couple of miles away.

The town has its own museum and small but fascinating quayside aquarium. 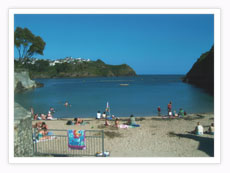 There are two beaches in Fowey, Whitehouse and Readymoney and, a five minute drive just round the headland, the soft sandy beach at Polkerris complete with rockpools, café and the old waterfront pub The Rashleigh. The famous Sam's in Fowey now has a wonderful beachside restaurant in Polkerris  and unlike the original in Fowey you can book. In between there is the magical and isolated Polridmouth bay.
Up river there are the little hamlets of Mixtow, Golant with its riverside pubs and beautiful little church of St. Sampson, Lerryn with its stepping stone bridge and waterside cream teas, picture postcard St. Winnow where some scenes of Poldark were filmed and finally the beautiful medieval town and 12th century capital of Cornwall, Lostwithiel.

For many visitors their holiday in Fowey is the beginning of a love affair that will last a lifetime, a part of an older way of life that constantly adapts but somehow never changes.